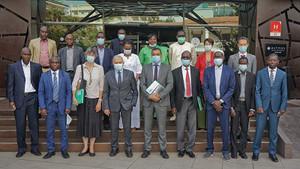 A vision for transboundary cooperation around the Senegal-Mauritanian Aquifer Basin (SMAB) has been developed by representatives of the States that share this aquifer system, namely The Gambia, Guinea Bissau, Mauritania and Senegal.

This work was carried out in the second meeting of the Regional Working Group (RWG) for Transboundary Cooperation on the SMAB, comprising the States as well as the transboundary basin organisations covering by the Senegal-Mauritanian aquifer basin, namely, the Organisation for the Development of the Gambia River (OMVG) and the Organisation for the Development of the Senegal River (OMVS). The session hosted by the State of Senegal from 1 to 2 December 2020 was held in a hybrid format. The RWG, established in April 2020, has a mandate to provide support and advice to States and transboundary basin organizations to establish transboundary cooperation for a concerted sustainable management of the SMAB.

The session of the RWG made it possible to outline the main operational axis for implementing this vision of transboundary cooperation based on the integrated development of groundwater and surface water resources, capitalising on more than half a century of experience in the concerted management of the sub-region's major rivers.

The SMAB extends over approximately 1,300 km with a surface area of 331,450 km2 and an estimated population of over 15 million inhabitants. The sustainability of cooperation is essential because this resource is under pressure due to the increase in demand caused by population growth, rapid urbanisation and the development of agriculture for food self-sufficiency. Sustainable management is necessary to ensure the stability of the region, water security and to sustainably meet the needs of different uses. Improving management and consultation between the various stakeholders will contribute substantially to preventing conflicts of use between countries and sectors that depend on this resource, which is today strategic for the region in terms of adaptation to climate change, as it is less vulnerable than surface water.

The design phase of a joint project and an action plan for the implementation of the concerted management mechanism began in May 2020 and made it possible to take stock of the situation in the aquifer basin and identify the various issues. The second meeting of the RWG was marked by exchanges on the possible modalities of transboundary cooperation in the regional dialogue between the four States sharing this aquifer system. The exchanges were based in particular on a set of preliminary study reports on hydrogeological, institutional and technical aspects. This design phase will end with the political validation of the transboundary cooperation proposals issued by the Working Group and the launching of the joint project.

In spite of the difficulties in managing the agendas linked to the pandemic context, it is a proof of commitment on the part of the States that this session was able to take place and that the preparatory work was completed thanks to the contributions of the States of the SMAB as well as the OMVG and the OMVS. The second meeting of the Working Group ended with an exchange session with several technical and financial partners involved in these issues to discuss avenues of collaboration.

The regional dialogue on SMAB is supported by Geneva Water Hub, the Convention on the Protection and Use of Transboundary Watercourses and International Lakes (Water Convention), whose secretariat is serviced by the United Nations Economic Commission for Europe (UNECE), and the UNESCO Groundwater Resources Assessment Centre (IGRAC) with financial support from the Swiss Agency for Cooperation and the European Union.